A thermographic survey can help us to identify hidden problems during and after construction, and also demonstrate performance against environmental standards. 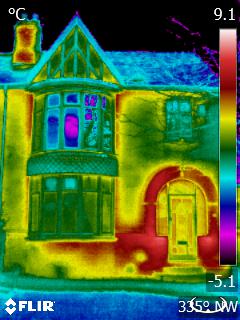 How does it work?

Everything that has a temperature above absolute zero (-273.15°C) emits infrared light, which is invisible to the human eye. If we were able to see it, this would be an extremely useful trait, as we could use it to detect differences in temperature in everything that is around us.

As we can’t see it, we have developed thermographic cameras to detect this light and convert it to an image that we can see. As heat is such a useful metric, thermography offers hundreds of practical uses, from detecting failing electronics and mechanical components, to veterinary medicine. Thermographic surveying of buildings is another use.

A thermographic survey is non-destructive, so we can use it to assess build quality in terms of thermal bridging, continuity of insulation, air leakage, faulty glazing, and evidence of moisture or water leaks to name but a few, all without any intrusive work.

It is a common client requirement that construction work is checked for continuity of insulation using a thermographic survey, as well as often being part of BREEAM certification. 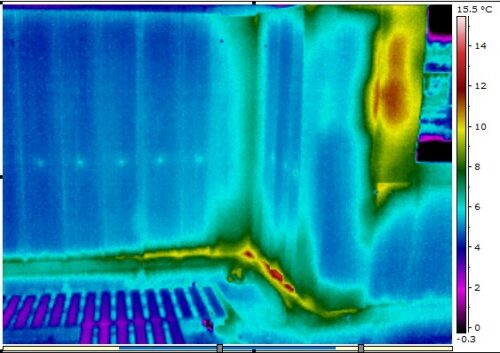 Evidence of air leakage in a parapet

It can also be used as a diagnostic tool for problems with buildings, such as identifying sources of roof-leaks in complex designs, checking under-floor heating, finding air leakage paths for air permeability testing, or to confirm building energy performance after a change in design or building materials.

Getting the best results from a thermographic survey

For surveys of buildings, the number one requirement is a temperature differential between the internal and external of at least 10°C across the entire envelope.

As such, most thermal surveys need to be conducted several hours after sunset, in buildings that are complete and have a heating system in operation to create the 10°C temperature differential. A survey of a large and complex building may take more than one night, but 99% of the time, they are done within 4 hours.

BREEAM is a globally recognised environmental rating scheme, and credits can be scored for carrying out a thermographic survey. To achieve the credit, the 10°C minimum temperature differential is a necessity, as is the wind speed (which must be below 5m/s) and there must be no precipitation. External surveys are also best done when there is cloud-cover.

As such, the weather forecast has to be closely monitored in the lead up to the survey so as to get the best chance of compliance. If the weather forecast changes on the day to show worsening conditions (higher wind speeds etc), then it is in our interest to delay the survey, even if it is just by a few hours.

As these requirements can give a very small window of opportunity, an internal survey is often preferential to eliminate some of the weather influences.

The temperature difference of 10°C does need to be in place for a minimum of 10 hours. However, due to some buildings having elements 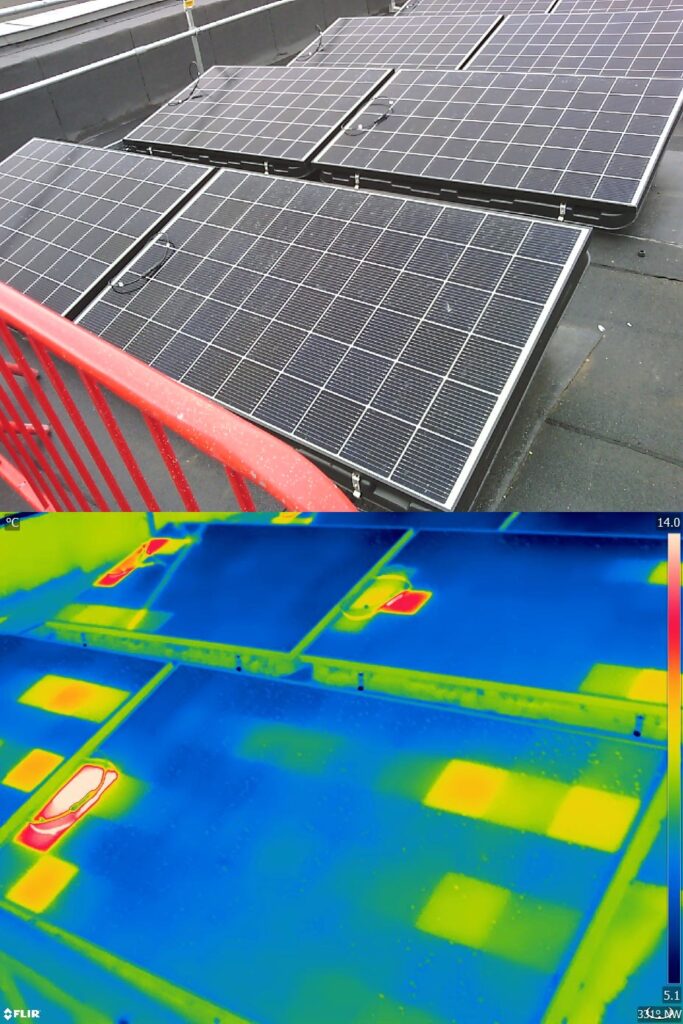 In the lead up to the thermographic survey, be aware that every area of the building to be surveyed requires the 10°C differential, so check each room to ensure that the heating system is working and hasn’t been turned off by site personnel. If an area of the building is not heating up as required, extra electric heaters may need to be temporarily used to meet the requirements.

Brief all site users of the heating requirements to limit the chances of heating being turned down, and windows and doors being left open. If a door is constantly open hours before a survey, this could give false temperature readings and be misinterpreted as a fault with the construction.

Thermographics have an incredibly broad range of uses, from medical diagnosis to military applications. One use closer to home is that of electrical fault finding and diagnostics. For example we can use thermographics to survey photovoltaic arrays to find panels which may be faulty or under performing.

"HPW Architecture Ltd engaged Build Energy to ensure we delivered a commercially viable solution. From the very first introductory meeting they provided a first class service by helping to demystify the whole process and demonstrated excellent knowledge. We have found their experience and advice invaluable and would have no hesitation recommending their services"