Air Testing – Which and How Many?

The regulations around air testing can appear complex.

Some dwellings need testing, yet some do not. One dwelling may also require a better result than another. So what are the rules? 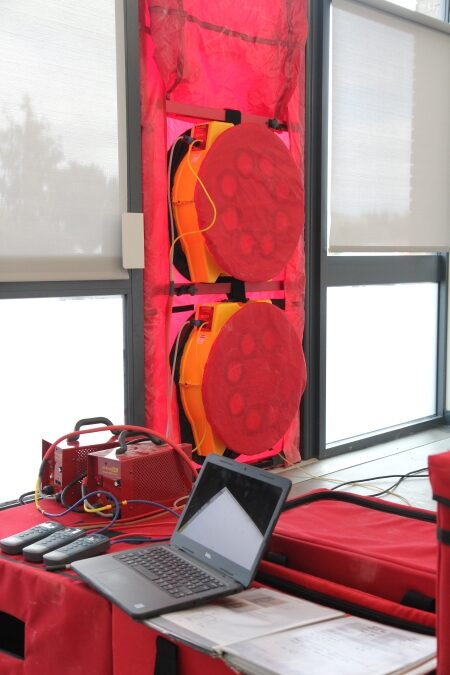 The procedure and method for air testing dwellings is set by:

It is important to remember that unless you are building a Passivhaus, the main driver for air testing comes from SAP Calculations.

SAP Calcs measure the energy performance of the dwelling, and one key aspect of that calculation is the air tightness of the dwelling – i.e how much air is leaking out through gaps and cracks in the fabric.

Without an air permeability figure, SAP calcs cannot be completed, and without SAP calcs, air testing is pretty meaningless!

It should also be noted that the latest Part L 2013 regs have pushed air permeability standards higher still, and they form a crucial part in achieving the new TFEE standard.

Which Dwellings Do I Need to Test?

This should in theory be decided by building control officers. In reality it is usually down to the test engineer to interpret the rules, and ensure the right units are tested. This will vary depending on the type of development. General principles are:

* If Accredited Construction Details (ACD’s) are used, only 1 unit of each type requires testing

Small schemes are those including 2 dwellings or less. In this case there are two scenarios which may avert air testing:

This means that, as long as the dwelling still passes on the DER/TFEE criteria using this ’15’ figure, no air testing is required.

In reality is is very difficult to get a dwelling to pass in SAP with such a poor air permeabiity figure. It also has an adverse effect on the declared energy performance of that dwelling, and so is rarely used.

2. Demonstrate that during the preceding 12 month period, a dwelling of the same type constructed by the same builder was tested and achieved the DAP

If a dwelling is not tested for any of the reasons above:

Figure remains as per DAP (assuming test units are no worse)

Use average of tested units plus 2m3/ hm uplift.

Therefore any untested dwellings under the later SAP regs will effectively take a ‘hit’ which will affect the energy performance of that dwelling.

For a dwelling which is a borderline pass, this may be enough to cause a SAP failure, and so the client in this case may choose to test that unit and secure a better result.

If a dwelling does not meet the required DAP, remedial works must be carried out and the dwelling re-tested until it complies. It is sometimes possible (depending on your test engineers schedule!) to retest straight away if quick, minor remedial works can be carried out. This may involve caulking or application of sealant for example.

Once the test is completed successfully, a further additional dwelling of the same type should be tested, thereby increasing the sample size.

For further reading why not take a look at: