Using a new build farmhouse in rural Dorset, we look at the strategies used to achieve a pass in SAP 2009 and see what else might be needed when the new regs – Part L 2013 – come into force on April the 6th. 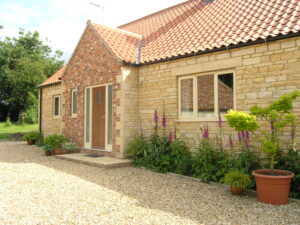 Achieving a good SAP rating has always been a complex and individual affair. A couple of gadgets for the boiler may be all the help that one new home needs to comply, while others may need more creative solutions, like a rethink of the building spec or the approach to heat and power.

I was interested to see how the advice we give to clients might have to change over the coming weeks when a tighter set of Part L 2013 requirements comes into force.

To find out I took a project we undertook last year – an attractive single story farm house in rural Dorset – and had a look at the advice we gave to pass in 2013. Would it be enough to meet next month’s Part L?

In 2013 our 115m2 farmhouse was fairly typical – the construction of the walls, floors and ceilings was just enough to meet the minimum U values laid out in Part L 2010. Windows had an easily achievable U value of 1.6 W/m2K, while heating and hot water came from a mains gas boiler with a normal modern efficiency.

In order to meet the carbon target we recommended constructing to accredited details for thermal bridging, and undertaking air permeability testing to achieve 5m3/hm2 at 50Pa or less. Our client could equally have looked to improve the thermal performance of the build with more insulation, or at technology to harness wasted heat from showers and boiler flues. But ultimately the client decided that these were the measures most appropriate to his needs.

The first thing that will strike any new constructor in the Part L 2013 regs is the TFEE (Target Fabric Energy Efficiency), that will now be assessed alongside the carbon a home produces per m2 per year. We’ve talked before about the technical changes to Part L, but how does this play out in practice?

After revisiting the project, the first hurdle was that the while the minimum thermal performances had remained the same, passing the TFEE with them was a real challenge. The new regs talk about an ‘elemental recipe’ – this is a prescribed set of U values for roofs, walls, floors and glazing – that will give an acceptable TFEE figure. But, as some insulation manufactures have pointed out, we found that by increasing insulation in one of these elements we were free to cut back a little on the others.

To meet Part L 2013 regs at the farmhouse, we could still work with a fairly typical modern wall spec of 100mm full fill cavity and a good aircrete block (giving a complete U value of 0.25 W/m2K), as long as insulation in the floors and roof was raised to pick up the slack. Adding argon filled windows with a lower U value also meant we could be less careful elsewhere.

All of the elements still had to be upgraded from the minimums that the farmhouse had been built to last year, but none of the products and specs we tried were ones that builders and architects hadn’t come to us with many times before.

Getting the Carbon Down – New Targets

Improved thermal performance helped with the carbon, but here too the limits have been tightened (by 6% on last years regs). Home builders that have worked with the Code For Sustainable Homes or an enthusiasm for low carbon should be familiar with the measures we recommend to get this figure down. For Part L 2013, at the farmhouse we could use the same thermal bridging and air testing with some additions. A client here might choose to fix a delayed start thermostat to their boiler and a waste water heat recovery unit to their shower. Alternatively they could look to solar panels for heat or hot water.

While Part L 2013 won’t let you rely on gadgets to make up for poor thermal performance, the way that we improve building fabrics and conserve fuel and power will remain much the same. For our farmhouse this meant looking at better insulation and some carbon saving tech, but the way you approach your build is ultimately still up to you. We look forward to seeing your projects in the coming months.