Cavity Insulation: Up the Wall with the New Regs

Changes in the regs will place big demands on the thermal performance of new builds after April 2014.

One of the take home points for me was that current insulation for walls was simply not capable of meeting the types of U values that were being suggested in new regs documents. 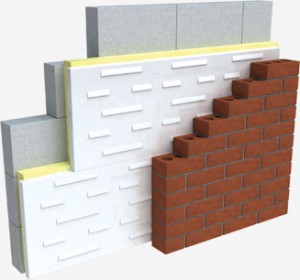 It became apparent as I was writing previous blogs that constructors would soon face a choice. Either expand cavity wall sizes beyond the traditional 300mm with 100mm cavity, or lose out here and compensate with better floors and roofs.

This was based on the best of the full fill cavity insulation products from manufactures including Knauf, Rockwool and Superglass. I also looked at partial fill PIR boards, including those from Xtratherm, Celotex and Kingspan. Though these boards have greater thermal properties, they need an air cavity to function correctly, and so the best 300mm wall U values I could come up with were around 0.24 W/m2K. This is far below the 0.18 W/m2K that the new regs suggest.

However, I have recently been made aware of some developments that may change things for the better. Xtratherm have a CavityTherm product touted as achieving U-values as low as 0.16 W/m2K in a standard 100mm cavity within a traditional 300mm wall. It’s true that a very good concrete block will still be required, but I found this was achievable when factored into some of our recent builds.

As far as I’m aware, Xtratherm are unique in offering full fill thermal conductivity this low. I’ve spoken with some of the other manufactures and no one knew of anything in the pipeline that would compete. The advice from Knauf is to build better in floors and ceilings (and they were among the first manufactures to write about this), while Rockwool are recommending alternate modular solutions to get walls this thick this low. It looks for now as though Xtratherm are the only ones offering business as usual with U-Values low enough.

This means the new fabric targets can now be achieved across all thermal elements through better performing products, and not necessarily revisiting the drawing board or changing architects plans. Constructors may be off the hook after all.