The Hoover Building – Journey through a Sustainable Renovation

Re-purposing a 1930’s factory is not without it’s challenges, especially for an iconic listed building.

Standing in Perivale to the west of Central London, the former UK headquarters of The Hoover Company is an eye-catching landmark for commuters and visitors. It has recently undergone a significant restoration into sixty-six new homes.

I was lucky enough to work with the design team for a number of years to measure and consult on low carbon refurbishment. The site has a fascinating history and number of innovations to achieve a more sustainable design.

Into the Pharaoh’s Tomb

The Hoover Building was designed by architects Wallis, Gilbert & Partners in 1931. The discovery by Howard Carter of Tutankhamun’s final resting place a decade earlier had placed Egypt in vogue in Britain, and the projects ‘Egyptian Art Deco’ character was well received. 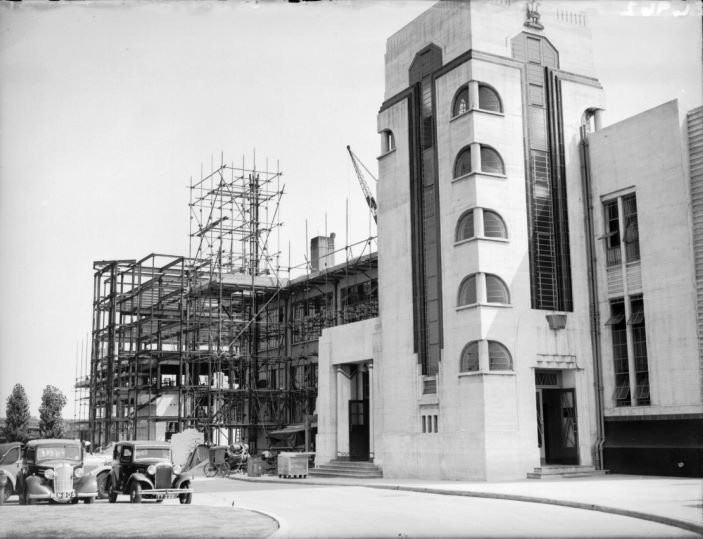 Many American manufactures in the interwar years sought grand European buildings to showcase their products to increasingly mobile consumers.

Thomas Wallis himself was firmly convinced of the value of an attractive building. “A little money spent in the incorporation of some form of decoration, especially colour, is not money wasted”, he said of the design. “It has a psychological effect on the worker”. Construction was completed in 1933.

The factory was formed of a double-height ground floor and single-storey first-floor above, making use of a complex reinforced concrete beam and thin slab construction. Externally, the workers Wallis envisioned saw a brilliant white concrete facade and full height Crittall steel windows. At one time, 1,600 of them were employed at the site.

By 1934 plans were already underway to extend upwards with an additional storey, stepped back from the main façade, with a central hipped roof. Building No 7, to the west of the main factory, was constructed in 1938 to serve as the canteen.

During the Second World War efforts turned to aircraft parts, some of which were used by the Spitfires and Hurricanes based at nearby Northolt. The building was disguised to prevent bombings from above. After the war an eighth building was added to the site, but over the years Hoover moved most of its manufacturing to a new facility in Scotland.

Wallis, Gilbert & Partner’s Firestone Tyre Factory closed in 1979, and was demolished just two days before it was due to be listed. This caused outrage among heritage groups, and over 150 interwar buildings, including the Hoover Building, had been protected by October 1980. The factory remains Grade-II* listed today.

By the late 1980s production had ceased.

The site was sold to Tesco for commercial and office use, and the unlisted northern parts were demolished to create a supermarket.

Although the main building was converted to form office space, it sat vacant for over a decade. By this time the original concrete façade, with its brilliant white ‘Snowcrete’ finish, was suffering from a cracking effect known as ‘concrete cancer’. Building Number 7 (the former canteen) was later refurbished to become a restaurant in its own right.

Art Deco London called the Hoover Building “possibly the finest Art Deco structure in Britain.” Clearly an opportunity existed to repurpose and refurbish the building for a new lease of life.

The architecture and engineering practice Interrobang began working on designs to conserve the historic fabric while inserting of a new timber structure within. This formed a mezzanine within the double-height ground floor, creating 14 maisonette homes. The original central staircase was to be retained to reach 21 flats within first floor, while an additional 31 homes located on the 1934 second floor.

A brand new timber third floor housed 12 apartments within the sloped roof, each with its own spiral stair entrance. The towers that sit at each end of the facade would host two new maisonettes.

Internally, many of the original Art Deco features were to be persevered and repurposed, including the light fittings, grand staircases with wrought-iron bannisters and terrazzo lobby floors.

The previous occupant had lined the building with second layer of glazing, however this did not align with the steel windows of the original façade. Interrobang planned to align replacement secondary glazing with the original frames to better preserve the external aesthetic.

The buildings location within London and the borough of Ealing placed an onus on the developer to adhere to several local and civic targets for sustainability.

Initially the local authority sought for the schemes energy use to be assessed under Building Regulations for new build homes. These hold more stringent targets for thermal performance and emissions, though they are not suitable when considering refurbishments. Existing materials cannot be assessed in the same way as new items, and many construction methods to avoid heat loss in new designs cannot be retroactively applied to an existing structure.

Our early advice and liaison with the planners allowed us to head off this problem and make sure we were on the right track. The Building Regulations for refurbishments were agreed upon instead, which set minimum standards for heat loss and efficiency of building fabric and services.

The ambition for a greener building remained. In the London Plan, the Greater London Authority (GLA) require new homes to achieve a 35% cut in carbon emissions beyond the Building Regulations. Ealing went one step further and asked that the refurbishment of this existing structure also meet this target. 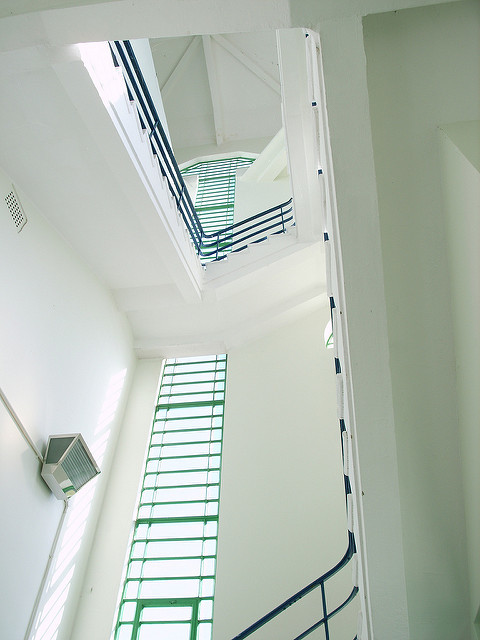 This meant materials, insulation and services all had to assessed, designed and revised to exceed the usual expectations for a project of this type. We were able to model and feedback on several versions of the project to find a specification which worked.

This was set out in an Energy Statement, a document required by the planners to show how their targets will be met before work can begin.

The planners also conditioned that the development achieve an ‘Excellent’ rating under BREEAM before it could be sold. BREEAM is a far reaching independent assessment of a buildings sustainability during design, construction and occupation.

As BREEAM assessors we were able to provide the design team with a detailed plan to ensure this was fully addressed. This was vital to achieving consent to begin work on site. Building to BREEAM was essential for the homes to be signed off by the planners and sold.

From our first consultancy upon the project entering the planning system, it was clear a highly airtight envelope and ‘fabric first’ approach to specification was required. Technology such as solar panels were considered unsuitable by the planners and heritage groups, meaning efficiencies needed to be found elsewhere.

Our design advice saw the 1930’s concrete walls improved with internal PIR insulation to meet modern standards for domestic thermal performance. The team has also been able to repair and refinish the concrete to restore the façade to its former glory, protecting the building for many years to come against the ‘concrete cancer’ risk.

Oakley M&E, the projects mechanical and electrical engineers, chose air source heat pump technology to provide space heating and hot water. These operate by converting the energy of the outside air into usable heat, creating a comfortable temperature inside the building as well as supplying energy for the hot water system. The key operational benefit of air source heat pumps for the user is the reduction in fuel bills.

The buildings mechanical ventilation includes a heat recovery technology to maximise energy saving. Reducing the need to open windows for ventilation has the benefit of reducing wasted heat, as well as traffic noise from the adjacent Great West Road.

Combined with the fabric measures this specification achieved a significant reduction in emissions over the Building Regulations baseline. Our advice and modelling produced an average 81.6% improvement in the carbon emissions per flat. This is when compared with the uninsulated building and a default electric heating specification. All energy targets set by the London Plan, BREEAM and Ealing were planned to be met and exceeded before work began.

A strict testing regime was applied during and after construction to ensure compliance with the criteria of BREEAM. This included the air permeability testing of every flat, to check for and avoid the unnecessary escape of warm air. Internal temperature and humidity were monitored before and after to mitigate the risk of condensation and damp. Unacceptable noise pollution was designed out and tested after work was complete.

Internal finishes including paints, adhesives and wood panels were chosen for their low volatile organic compound content and to improve indoor air quality for future residents. Many building materials were sourced for their environmental credentials and accreditations in line with our plan for BREEAM, such as the FSC certified timber which was largely assembled off-site to avoid disruption. A significant percentage of waste generated by the refurbishment was diverted from landfill for other uses.

For future occupants, generous cycle storage and provision for home working has been provided to meet the highest standards available under BREEAM and reduce reliance on cars. Energy monitoring devices will allow residents to view and record data for electricity and water consumption, emissions and costs, in real time. This helps to fulfil the GLAs objectives of increasing a demand side response. Water fittings have been chosen to maximise efficiency. Energy efficient appliances were provided to future occupants to fulfil BREEAM targets, and in a nod the original purpose of the building, Hoover branded items were chosen.

The refurbishment has won praise throughout the industry. The Architects Journal have described the project as “a model of sustainable conversion”, and shortlisted it for their prestigious Retrofit Awards under the ‘Listed Building – £5 million’ category.

BRE also nominated the project for the annual BREEAM awards, where our approach to addressing the BREEAM criteria extensively prior to planning was praised. Our calculations and reporting have demonstrated that all targets in planning and the building regulations relating to sustainability were met and exceeded. It’s been a pleasure working with the design team to ensure a future for this iconic structure for many years to come.