How Much Does BREEAM Cost?

Total floor area certified under BREEAM has doubled in the last two years, as the sustainability rating system becomes an increasingly powerful planning and marketing tool.

According to statistics released last month, Breeam has now certified a total of 44 million sq m of floor space – nearly four times the amount in 2008. Project registrations have also increased from 20,000 to 44,000 since 2008 with a sharper upward trend from 2010.

“BREEAM is increasingly used by owners and developers to help drive sustainability, says Simon Guy, head of sustainability marketing at the Building Research Establishment (BRE), which administers the scheme. “It is also attracting a lot of interest from the investment community as a means of protecting and enhancing the value of a property portfolio.” Breeam standards are also being increasingly linked to planning, with a growing number of local authorities writing Breeam into planning policy.

“If you just meet Building Regs you’ve done the worst possible you can get away with” says Ant Wilson, director of Building Engineering at Aecom and project director of the recent Target Zero research into sustainable design.

“It’s often now a requirement of planning to attain certain levels of Breeam.”

But while Breeam’s relevance and profile have undoubtedly increased, finding the most economic way of achieving these standards can be a complex and opaque issue. Research carried out by Aecom and costed by Sweett Group as part of Target Zero tackles this by setting out the most cost-effective ways of achieving the Breeam ratings of “very good” “excellent” and “outstanding” for five standard case study buildings from five different sectors.

While the base case buildings are steel-framed, Breeam does not include the direct impacts from the frame, so the results are relevant irrespective of framing material chosen.

It also identifies the costs of achieving these ratings compared with a base case version of the buildings that, in terms of operational carbon, met the minimum requirements under Building Regulations Part L (2006).

In all five building types – distribution warehouse, supermarket, office, secondary school, mixed-use development – relatively small uplifts of between 0.04 and 0.2% were needed to achieve “very good” with slightly more – between 0.4 and 1.8% – to achieve “excellent”. As might be expected, the big difference comes when achieving the top rating of “outstanding”.

The distribution warehouse was the cheapest, requiring a cost uplift of 4.8%, followed by mixed use (5%) and secondary school (5.8%). The office and supermarket were the most costly to attain “outstanding” requiring a 9.8% and 10.1% uplift respectively.

Involving a Breeam assessor early is another way of achieving Breeam credits and is a good way to start, according to Wilson.

“If you have a good Breeam assessor on your job they’ll have an idea of the cost of what’s required, and can tell you the cheapest way of achieving the right credits to get certain ratings,” he says.

“One of the things that came out of Target Zero is the cost differences that get the same outcome in Breeam.” 10 score well on Breeam, it’s vital to get the energy performance right.

“Do all you can with the fabric of the building” he says. “First get the building to consume far less energy in the first place to get the loads down, and then control its systems efficiency.

“Try to get the energy balance right. It’s not just about insulation and low U-values – sometimes you have to let the heat out to limit solar and internal gains.

“With all types of buildings, ‘outstanding’ is a big ask, particularly for speculative buildings” she says. “You need to have a lot in your favour in terms of location credits, including public transport and a brownfield site in the first place, to give you a good basis.”

A frequent stumbling block is achieving the compulsory 10 out of 15 energy performance credits needed to attain “outstanding.”

Gaining sufficient water credits can also be a challenge, she adds, since they sometimes push clients towards unfamiliar products or technologies that they may not be comfortable with.This can be a particular issue with hotels. For retail, the key issues are lighting and in the case of supermarkets, refrigeration.

Since they tend to require lighter floor structures, says Lowe, steel-framed buildings generally benefit under Breeam from using less material, while the often prefabricated nature of steel structures can also count towards a better rating, tending to generate less waste on site.

But steel’s potential for recyclability is not yet rewarded, although this might change if future versions of Breeam give more weight to end-of-life issues.

“Steel is more sustainable in a whole-life argument because of its re-use capability.” says Wilson. “Recycling a building asset might be better than ripping it down and starting again.”

Breeam’s growing relevance to planning was noted in the last year’s Good Practice Guidance: Sustainable Design & Construction, produced by the TCPA, BRE and a number of other industry bodies. This referred to several examples of planning authorities using Breeam as a reference for required sustainable standards.

The importance of the Breeam rating scheme is likely to grow as it expands from new construction and in-use assessment schemes into refurbishment.

BRE is currently seeking further pilot projects to test out the criteria and identify opportunities and barriers for sustainable refurbishment. The scheme is expected to launch this autumn with the next general update to Breeam due in 2014.

These diagrams summarise the most cost effective routes for achieving each Breeam rating. 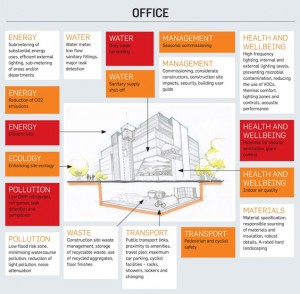 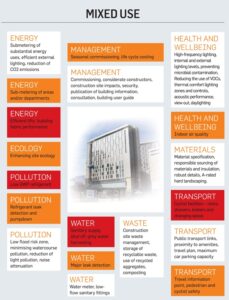 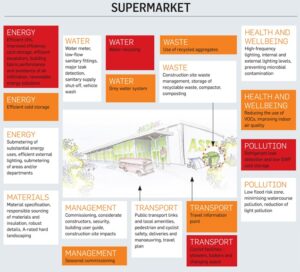 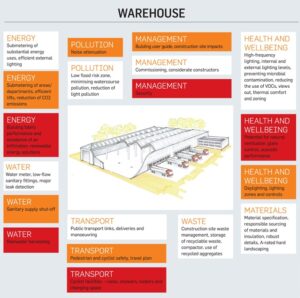 We thank BDonline for the use of this BREEAM article.